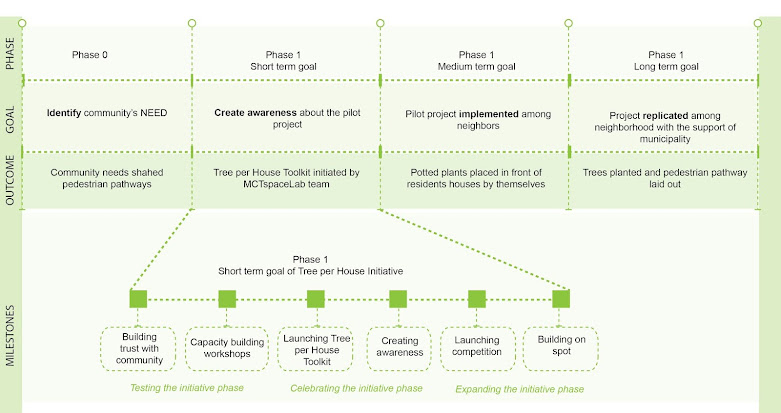 Urbanization processes have taken momentum exponentially in the Sultanate of Oman since the oil boom of the 1970s. With the land lottery system (royal decree 81/84 and 125/2008 that allocates state-owned lands to Omani citizens for residential purposes as a scheme for housing public-welfare), the government has provided easier access to land ownership to their citizens. Rapid urbanization is thus tackled by authorities through provision of larger infrastructural development (eg. provision of streets, electricity, waste collection etc...) within city level whilst the smaller “urban living rooms” within a neighbourhood remain concerns for the residents to tackle. Hitherto, the Sultanate has been operating primarily with modes of top-down planning approaches following contemporary planning systems. However, as the population density in the capital city of Muscat starts to rise in the last decade, a need for incorporating other planning modes as well as actors is evident.

MCTspaceLab finds potential to tap into the discussion of organization and usage of space at the neighborhood level. At this level, we believe, that the empowered citizens can take charge to appropriate the spaces around them as per their need. MCTspaceLab, works as a facilitator in the process and provides capacity building workshops, while the residents take matters into their own hands. The Tree per House Initiative is step in the direction of bringing about the participation of the community in the development of their neighbourhood spaces.

What is ‘Tree per House Initiative (TpHI)’?

Tree per House Initiative (TpHI) aims to explore the potential of bottom-up planning, in the context of Muscat. In order to explain the TpHI, a clear understanding of the current land division and ownership within neighborhoods in Muscat is required. The two primary defining elements in a streetscape within a neighborhood is the individual plot boundary of residential or commercial/residential buildings that are privately owned followed by the street network that is a space provided and regulated by the local municipality. Between those two well defined spaces, is a connecting buffer space. This buffer zone in particular exhibits a different system as it is built and regulated by the individual plots, yet is it a semi-public space that is owned by the municipality. Building on this, the TpHI identifies and seizes to optimise these spaces within neighborhoods that are semi-public.

These semi-public spaces are often large interlocked used for as parking spaces for the individual plots or as an undefined path for pedestrians walking. Hence the mirco-climate of these areas tend to be heat-islands due to the surrounding surfaces, making the walk for the pedestrian unbearable. Furthermore, kids often make these residual spaces their play areas in the evening, claiming it temporarily. Men gather around in some of these spaces before or after prayers to exchange small talk with neighbours. Women and the elderly population also show similar behaviour, while occasionally sipping their evening tea, or returning from grocery stores. However, a lack of proper small-scale street furniture keeps these encounters short and minimal. While necessary activities still take place, social activities are kept in check, even though these spaces hold high potential for social interaction. The Tree per House Initiative aims to address the two needs of residents touched upon in the previous paragraph: The need for shaded walkways and vibrant public spaces.

Every resident of the neighbourhood has the right to these spaces; thus, the Tree per House Initiative aims to collectively turn these residual spaces into vibrant neighbourhood meeting nodes. TpHI focuses on the individual households' acts to achieve a collective goal, through planting a tree in front of their property for the walking pedestrians within the community. In turn taking the responsibility to maintain it. The initiative is easily scalable and relies highly on the motivation of residents. It holds the potential to turn pedestrian pathways in a neighbourhood into shaded walkway and vibrant social spaces.

Learning from urban practitioners around the world the concept of Tactical Urbanism has proved to be successful in developing small scale temporary urban installations that hold the potential to transform spaces within neighbourhoods. With the publication ‘Tactical Urbanism: Short-term Action, Long-term Change‘ young urbanists Lydon, Mike, Dan Bartman, Ronald Woudstra and Aurash Khawarzad showcased temporary actions around North America which brought to light the potential that such actions can have on the development of public spaces within our cities. Furthermore, in the early 2000s, Studio Urban Catalyst based in Berlin explored this concept in post-industrial Europe. Tactical Urbanism also referred to as DIY Urbanism is a concept where residents have the potential of creating liveable, safe spaces in order to enhance their own public space. With low-cost, easy to use local materials, residents’ initiative starting as small-scale temporary interventions, holds the potential to quickly scale up to permanent long-term changes to the neighbourhood fabric.

In light of the current emphasis of localising the Sustainable Development Goals, Oman is gradually moving up on the scale. TpHI aims to create a ripple effect by scaling up from a micro to a macro scale. TpHI keeps the following SDGs in the core of the initiative directly working with: Goal 13 – Climate Action, Goal 15 – Life on Land and Goal 04 - Quality Education while keeping Goal 11 – Sustainable Communities as the umbrella. The aim of the initiative is thus not only to develop spatial qualities within a neighbourhood but also having an impact on the social capital by providing quality spaces for the neighbours.

Phase 0: Capacity development and idea formulation, carried over for a significant time, this phase aims at building trust with the community and capacity building of participants, which resulted in providing a base for starting the initial testing phase of the TpHI (For summary of workshops conducted scroll down to figure 3).

Phase 1: Testing the initiative phase, carried over a period of two weeks to a couple of months, consisting of a small street containing 10-20 houses on each side. During this phase it is advised to revaluate the positioning of the pot in accordance to daily movement within the defined semi-public space. Perhaps more pots are required or the position of the pots needs to shift. During this phase it is also encouraged to personalize the pots through colouring or additional elements to symbolize an individual house or a collective number of houses.

Phase 2: Celebrating the initiative phase, carried over a day to a week, consisting of 20 houses along with community representatives, local sponsors or partners, and representatives from local municipality or administration level. During the celebration it is advised to showcase your Tree per House Initiative to the neighborhoods and local authorities through a day or a week of activities aimed on the exchange of thoughts, benefits, and knowledge gained during the period of testing the TpHI on a small scale. This is crucial as it is the first step in the expansion of the safe and green pedestrian network within your neighborhood.

Phase 3: Expanding the initiative phase, carried over a period of six months to two years, consisting of half of the neighborhood involvement. Following the celebration phase, a ripple effect of streets taking the initiative forward would be seen. This might occur in a dispatched or organized manner depending on the level of community organisation within the neighborhood. In addition, it is encouraged to expand the discussion with local municipalities on the needs and benefits of a safe and green pedestrian network within the neighborhood. This step helps to secure local budgets for the required expansion to a permanent, semi-permanent infrastructure for the TpHI. In addition, with 30% of the neighborhood taking the TpHI forward, expansion  of bicycle lanes are possible.

Structure of the toolkit 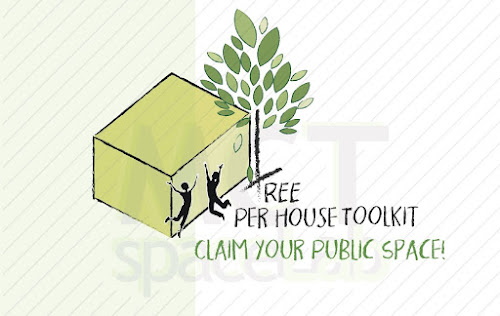 This toolkit is divided into four segments:

Part 1 – provides a general introduction to the toolkit and illustrates TpHI’s aim and vision.

Part 2 – provides a step by step procedure of how to get started. It includes all materials and tools that is needed for the process. The list of suggested tools is connected to the selection of plants and pots that you would want to have. They are easy to use and follow a DIY concept which can be handled by all age groups. The price range of these tools and materials range between 1 OMR to 5 OMR and can be easily found in your nearest hardware store or planting nurseries.

Part 4A: Catalogue and evaluation pot type- provides a catalog of different pots that you can buy or make further providing a simple evaluation chart along with this toolkit with the following parameters of assessment:
-Production process: Some of the pots we suggest can be produced at home with simple material and tools. Therefore, this scale helps you identify how much time and how many materials is required for the process.
- Availability in Muscat: On the other hand, if you would like to buy the pots directly, this scale provides a simple indication of its availability at proximity in Muscat.
- Durability: This scale identifies the ‘long-lasting’ nature of your pots.
- Price scale: Identifies the price range comparison between the different types of pots presented in this toolkit including cost of purchase and cost of building the pot from scratch.
- Maintenance: Identifies the level of maintenance required after your plants have been potted.

The toolkit further taps on promoting the usage of recyclable material and thus introduces wooden pallets as a possible material for making planting pots. They are widely used for storage, stacking or transporting materials and are thrown away once they serve this purpose. Therefore, wooden pallets can be found for free around construction sites and large dumpsites. 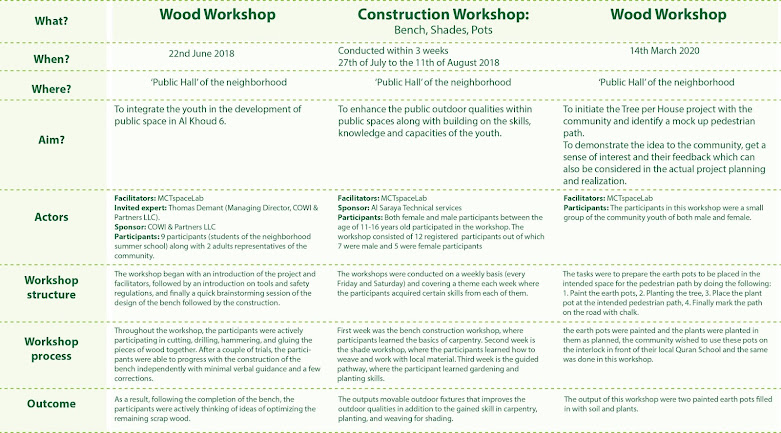 Figure 3: Summary of workshops conducted in preparation for TpHI